Jessie lost a tooth. At the age of 32(ish) she’s now experienced her first tooth loss.  Dentist said the rest look good,  nothing else loose,  and that it’s a top molar so less risk of impaction.

I was going to wait on the dentist until spring was here (snow blocks the path to the barn),  but Jessie seemed to be chewing oddly.  Mainly,  she seemed to be chewing on the right side of her mouth,  and for a few days she seemed less enthused about the hay than normal.  After that she seemed normal. I got chastised a bit by the dentist for not having him out immediately to pull the tooth,  but I’m not sure I could identify the issue again even now.

I never found the tooth.

After everyone had their teeth done,  Jessie wasn’t eating her hay.   She kept pushing it around,  taking a few pieces in her mouth and spitting them out.  We also had a 20 degree drop in temps between 12 pm and 2 pm,  so i was a bit worried.  I bundled her up,  watered her grain down to mush,  checked on her often,  and hoped for the best.

Next day she was eating hay with gusto.

Hopefully she doesn’t lose any more teeth for a good long while.  She’s kind of a picky eater.  I guess I better get serious about researching diet options for senior horses. 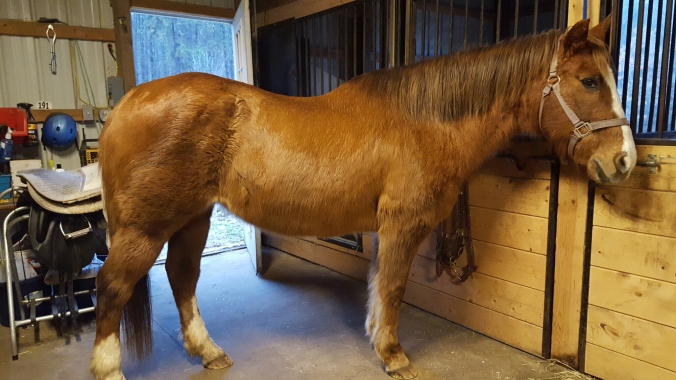