I have 2 versions of this story for you.

I was determined to get Joy in a moving trailer this weekend.  Here’s the post for our only other hauling experience together.

I wasn’t sure what to expect from Joy. We’ve worked really hard to make Joy as comfortable and relaxed as possible in the trailer,  but…  I was nervous how she would react

She loaded up easily,  as usual.   I clipped her in and closed the divider.  Normally I dont do this, but no problems. Joy stood patiently.  I shut the rear door,  which I’ve only done once before. Joy was a touch nervous,  but no major issues. A few half hearted, nervous,  paws and that was all.

We jump in the truck and head out…

The last haul with Joy,  the one where we brought her home and my only time hauling Joy… by the time we were half a mile down the road,  Joy was climbing the walls and attacking the window with her front feet.

This haul,  I must’ve held my breath for at least 5 minutes just waiting for the explosion.  We drove…  Joy stood there curiously looking out the window.  We drove some more…  Joy looked almost comfortable.  Some shifting around and she was very alertly looking out the window, but absolutely no hysteonics.  All four feet on the ground.  No flinging herself against walls.  She rode almost like a seasoned veteran.

Who’s horse is this?!

I think I started breathing again at this point.

We only went around the block with her.  A short ride.  Two large pick up trucks passed us,  and I could hear a bit of scramble behind but nothing major.

When we pulled back into the yard,  Ava and Jessie were screaming their fool heads off and racing up and down the pasture.  I could hear Joy answering them,  but still no major freak outs.  Just yelling back to her friends.

I opened the trailer up and unlatched Joy,  but asked her to stand in the trailer for a moment while I fed her carrots and made a fuss over her.  She complied.  Then I unloaded her,  which she did calmly,  and let her graze a moment.

Then I asked her to load again..  I honestly didn’t expect she would,  but she hopped right back in.

We’re going for another haul tomorrow,  slightly longer,  to hopefully get another positive experience under her belt.

Then i can start planning out where her first outing will be.

I’m so relieved.  This went so much better than I feared it would go (I’m a worry-wort,  worst case scenario dreader.  She probably would’ve been fine long, long before this).

Grainy pic of our trailer cam. I circled Joy in red. Taking this picture broke the feed,  so we went sans video for half the trip. 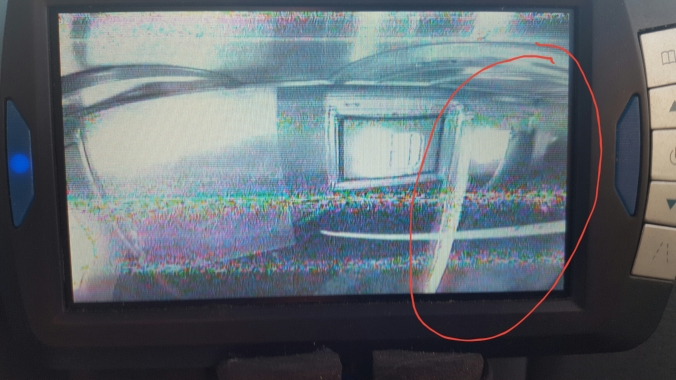 Joy was so thankful to finally be leaving the evil “She Beast”,  Ava, that she didn’t care where she was going. Joy was just happy to be leaving. Joy knew anywhere the evil mare wasn’t at was a good place.

When Joy realized that her trip had taken her right back to the pit of hell she thought she’d escaped,  she screamed “Nooooo!!”  over and over.

Eventually her owner came and pulled her off the trailer.  Only to lead her back into the jaws of the evil black mare.

3 thoughts on “Our First Haul”