This is going to be my last update on Ava’s injury (unless something major happens). I had the vet out to do more ultrasounds last week. Previously, the vet was unable to see any signs of injury or damage, but this time he was seeing an enlarged medial Femorotibial pouch and flaring.

When I asked the vet his opinions on Ava’s chances of making a full recovery without surgery he just shook his head and said that wasn’t possible. He said the only possibility for her returning to her previous athletic ability would be surgery, and that would only be if the tear was small and the surgeon could fix.

If Ava’s tear is small, and the surgeon can reach it, the prognosis of a full recover is approximately 50%.  If it’s not a small tear, or not easily accessible, then Ava will be lame the rest of her life.

I’ve been reading every article and forum I can find about stifle injuries and none of it is good. In fact, it’s thoroughly sad and depressing.

I found this article, “Meniscus and Meniscal Ligament Injuries in Horses” (bottom of page),  which I think sums up my research pretty well:

Arthroscopic examination is indicated in horses that fail to respond to conservative treatment (ie, rest and anti-inflammatory medication followed by controlled rehabilitation). Arthroscopy allows assessment of the extent and severity of injury, although only the cranial and caudal poles of the menisci are visible arthroscopically. Arthroscopy also allows torn or fibrillated fibers of the meniscal ligaments to be debrided and flaps of meniscus or fibrillated meniscal tissue to be removed.

Arthroscopic surgery of the femorotibial joints is essential to determine the extent of the injury as well as enabling treatment. The most appropriate treatment depends on the configuration of the tear. Loose or unstable tissue, usually at the cranial axial aspect of the meniscus, should be debrided. Longer more abaxial tears may disappear from view under the femoral condyle making debridement challenging and the resulting defect extremely large. For these cases, some method of repair is required. Two repair options include implantation of stem cells or intra-articular suturing, neither of which have been trialed in large numbers of affected horses. Stall rest for 4-8 weeks will minimize further damage to the MM and associated soft tissues.

Horses with lesions confined to the cranial ligament and cranial horn of the meniscus have a fair to good prognosis for returning to athletic competition following arthroscopic debridement and prolonged rest (6-9 months). Athletes with large tears involving the body of the meniscus as it courses under the femoral condyle, complete avulsion of the cranial attachment and concurrent CoL or CrL damage have a poor prognosis for athletic use.

Or this article from “Diagnostic & Surgical Arthroscopy of the Femorotibial Joints“:

The overall prognosis for meniscal injuries is around 50% return to function with the actual prognosis being greater or lesser depending on the severity of the injury.

Horses may have mild residual lameness after their rehabilitation which may respond to medication with corticosteroids once the horse comes back into work.

And this article from “Arthroscopy for Meniscal Tears” by Susan Piscopo, DVM, PhD (2004)

“There are two main difficulties with menisci,” says Tim Phillips, BVetMed, CertEP, CertEO, DESTS, Dipl. ECVS, MRCVS. “First, damage to them is hard to diagnose prior to surgery, and second, they are difficult to access during surgery. Only the cranial and caudal poles (front and back ends) are accessible.” Arthroscopic findings at surgery were graded by severity.

A successful outcome was defined as returning to previous work and remaining sound. Forty-seven percent of horses had a successful outcome. “Horses with simple tears confined to the front of the joint have a good chance for recovery,” says Phillips. “Horses with tears that extend out of view during surgery, however, and with tears associated with osteoarthritis, are more likely to stay lame.”

I’ve had some people suggest stem cell therapy. I’m going to check into that.  There’s also a treatment option called IRAP ( Interleukin-1 Receptor Antagonist Protein), but that is suggested for horses with OA or inflammation in the joint. And PRP (Platelet Rich Plasma), which appears to be significantly cheaper than the other treatments at approximately $1,000 per treatment. I’m going to ask about stem cell and PRP treatment to see if either are available, and if so, what’s required to do that.

Today, we’re going over to my brothers house to build a third stall in his barn. And then we’ll move Ava’s to her new home (hopefully before the snow really builds up). He has a few acres, and two older, quiet horses that Ava can hang with. Plus, his house is only about 15-20 minutes from mine so I can go see Ava regularly. 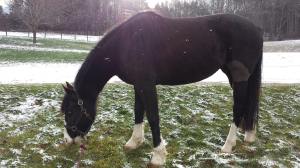 Ava with her shaved stifle

I’m heart broken.  And I feel terrible for Ava.  She didn’t deserve this.

And I don’t get how this happened. I watched her like a hawk the past four years. I was at the barn nearly every single day checking fencing, checking water, checking feed, checking everything.  If I had to drive out to see her twice a day then I did.  I was like the super horse mom nut that went overboard on protectiveness. If a barn started doing anything I felt was unsafe, I moved her. I don’t know what else I could’ve done to prevent this!  I tried to protect her, and I failed. I’m so angry at myself, and at the situation. I feel like I failed her.

But all I can do now is try to do what’s best for her both physically and mentally. I’m worried about surgery on Ava since she has a history of allergic reactions to some drugs. And although I would gladly put myself in debt to make Ava better, a 50% success rate (on only the small tears) doesn’t seem like very good odds to me.

Anyway…. If anything of note occurs with Ava I’ll be sure to keep everyone updated, but as of now, this will be my last post whining about Ava’s injury.  I’m tired of crying, and it’s not helping Ava, so from now on Ava and I are on a new “Pasture Puff Adventure”! I’m sure she will love her new career even more than her old one. And over time, she may heal up enough to be a light trail horse. She’s always been awesome on the trails. I know she would love doing that the rest of her life.