Another year down. It didn’t feel like a super great year, but it wasn’t a bad year. I had the privilege of taking a few lessons with some big name trainers, I broke 70 on a  test for the first time ever, and I transferred to a new position at work that is far more challenging and difficult then I had expected (they haven’t fired me, yet… ).

I think what I’m most proud of though is working through the problems Ava and I were (are) having with collection, forwardness, and working over her back. Not that these are fixed, but it’s been a hard road this year and we’ve come a long way since the start of the year. More importantly, I’m starting to see that she can do the more collected work. To be honest, at the beginning of this year I was ready to give up all hope and just cave to the idea that Ava just didn’t have it in her to go above First Level. I worried that my need to go higher was causing me to be unrealistic about her abilities. It seemed like no matter what I tried, nothing worked. Nothing came easy, and most of the time what was supposed to be “progress” just looked horribly ugly.

It wasn’t until the Pam Goodrich clinic that I realized what was missing from the training.

I had thought I understood forward and that elusive idea of “in front of the leg”. I hadn’t.  We were the opposite of “in front of the leg”. The embarrassment I felt at having Pam prove how behind the leg Ava was, was worth every single penny. What a mess I had created. This wasn’t something I could fix overnight, but finally understanding the difference between what I had and what I needed changed everything immediately. Pam showed me what could be with my horse, and I grabbed onto it like a life line.

It was then that I decided to take lessons with Rosalind Kinstler. I knew I wasn’t quite figuring out all the pieces and what I needed in order to reach the next level up. I decided a different perspective, a different slant on things, might help knock me out of my comfort zone enough to help me reach my goals a little quicker.

The first lesson with Roz went really well. And I ended up with so much homework that I felt a little overwhelmed at first. As the month progressed and the second lesson was looming on the horizon I really started to get nervous. I didn’t feel like we’d made any progress, and I started really doubting that I was capable of training the horse correctly. But I stuck to the plan, and the following month went to my second lesson with Roz.

The second lesson was just as jammed packed with homework as the first, but it was during this lesson that Roz commented on how much Ava’s canter had improved. Ava’s 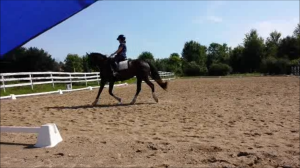 forwardness was more ingrained, her departs were more consistently driven from the rear, and she had more jump in the canter then the previous month. I realized that because I see Ava work day-to-day that I can’t see the how much she really improves. I see little improvements during a ride, but I end up feeling like I’m drowning in minutiae. I end up feeling like nothing is progressing, that I suck, that I’ve failed at being a dressage rider. This second lesson really showed me that instead of getting locked into the daily view that I need to step back every month and look at the bigger picture. It helps me realize how much we’ve improved, it allows me to feel capable, and it gives me a deep sense of satisfaction. It also helps me to understand how the exercises are working to develop my horse into an athlete, and to see what is working best for Ava and what things I need to tweak to get even bigger improvements from my mare. The lesson itself was great, but the concept of monthly status checks was something that made me step back and re-evaluate how I had been viewing our training previously. It was an eye-opener for me.

I had three lesson with Roz before going back to a clinic with Pam in September. I couldn’t afford regular lessons with my own trainer when taking lessons with Roz, so between June and September I only had the 3 lessons. I was proud of what I’d accomplished between June and September, but worried that Pam (with her experiences with top level riders) would think it was nothing. I’m not sure why I needed her approval so badly, but it really did matter to me deep down.

When we started the first lesson at the clinic, it was Pam being the usual Pam with her in your face, get your

horse moving, what are you doing, type instruction. I felt… defeated. So I asked her during the first walk break if she could see any improvement in Ava since the June clinic. I waited with baited breath…. When she told me the horse had improved and pointed out where, I was so happy. Not only could she see an improvement, but the parts I had worked so hard on were where she saw the improvement. Now, I like to assume that Pam, with her no-holds-barred approach to life, would tell it to me straight. So if she said they improved and she liked where I was at, then she wasn’t just sugar coating something to make me feel better.  Not that Pam didn’t almost make me cry the rest of the lesson, but I sure was happy knowing that we were solidly on our way toward the upper levels and not stuck in the First Level purgatory. (disclaimer: not that being at first level is purgatory, but being stuck there for several years doing the same tests over and over is purgatory for me).

The rest of the year after the clinic kind of fell apart on me. And this is where I’m most unhappy with how the year went. I had planned on two more lessons with Roz before she migrated south for the winter. However, my horse had different plans. After 5 hours trying

to get Ava on a trailer, missing the lesson, and totally losing my cool, we called it a season and went off to work on the basics of horse training. Like trailering lessons. I am proud to say that as of November, my horse willingly jumps on a trailer without a fuss. I’m hoping that sticks with her over the winter.  The rest of our dressage training has been kind of hit or miss. I am still in search of a good dressage saddle that fits Ava and myself better. I am very bitter over how my saddle likes to slide my legs forward. A much taller (read average sized person) would fit wonderfully in this saddle, but for my stubby little legs it just doesn’t work. I am becoming very angst ridden about the saddle, so have spent a great deal of time trying to find one built for midgets with fat butts.

Anyway, that was my year. I made two videos to show the differences in where we were at various points in time. The first one is showing June to December and highlights the shift in balance toward the hindquarters that occurred over the summer. The second video is showing the difference between when I first got Ava to a few months ago. I would show more current video, but apparently my riding is going to hell in a hand basket.