I saw a post on Aspire Equestrian’s blog for a training challenge! I love challenges, and I love free help. So of course I want in on this!!

Avandarre’s Response to the Challenge:

What we are trying to achieve: Clear, energetic, and relaxed canter-to walk transitions is what I’m working on.

What we are doing currently to get there:  I stole an exercise from a video I watched a couple of weeks ago. The concept was to do a simple change at A, E, C, and B. At each letter, take the opposite lead. So A = true, E = Counter, C = true, B = Counter, etc.

Also working on haunches-in, counter canter, shoulder-in, and half-pass. With a focus on trying to keep my upper body centered and balanced (I have an issue with that).

My horse is being weird lately. I know part of it is inactivity. I haven’t been riding her lately. The main reason is that her teeth need to be done… badly.  The dentist keeps cancelling our appointments though.  I can’t ride Ava until her teeth are done. When I do, she immediately starts sucking on the bit in a weird way, and if I touch the rein she will fling her head into the air and shake it vigorously.

Obviously it hurts her, and I don’t want to cause her pain, so I haven’t been riding. And I hate lunging. She’s obnoxious on the lunge line, and it bores me to tears to lunge.

It seems like Ava’s been in heat for three months straight. She’s giving the barn owner fits with haltering (it may be teeth related) and leading her in and out. I don’t have a problem with haltering and leading her.  Apparently Ava is a snot when the barn owner attempts to halter her, and is being very naughty when being led in from the pasture. Like rearing kind of naughty.  She’s a saint for me.  She might give me a little attitude, but if I even look at her in a stern way she toes the line. However, regardless of who leads her around I expect my horse to act appropriately! None of this rearing and being snotty with ANYONE. But how do I fix that?? I have worked for 3 years on her leading behavior so that she’d be the easiest horse to lead in.  She is better trained in leading than any other horse at the facility, by a mile, yet she’s bad enough for the owner that it’s becoming a real issue. And it’s partly because Ava can make herself appear to be 17 hands tall when she raises her head up to full Friesian height. She’s can be intimidating when she wants to be.

Ugh. I’m frustrated by this. Not that I ever want to sell Ava, but if for some unforeseen reason I needed to sell her, then I want her to go to the best home possible. Which means she HAS to be a well behaved equine citizen for anyone to handle. I’m not sure how to fix this problem other than working Ava more, and spending more time working her where she gives the owner the most problems (by the other horses).

<edit to add: I re-read my post and I see the problem now. hahaha> 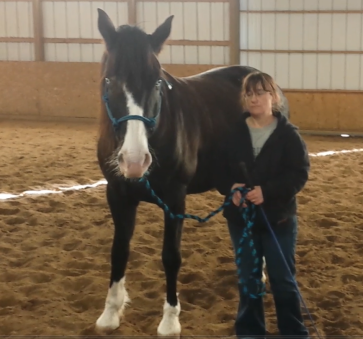 15.2h horse really shows you how short I am.

On a funnier note… I’m at the barn last night playing with Ava (who hasn’t been getting the exercise she needs), and Ava is squealing every time I hold my hand up toward her face. Squealing and snorting like some kind of crazed beast. So I popped her lightly with the lead rope on the shoulder every time she did it (if you don’t it escalates). She’d stop for a second, look at me, then rear and bolt sideways while bucking, until she hit the end of the lead rope (about 10 feet). Then she’d stop and stand there staring at me. I’d pull her back, hold out my hand, she’d squeal, I’d tap her with the rope and say no… rinse and repeat. I put her on the end of the rope and asked her to walk around me, and she flings herself around like she’s violently opposed to the lead rope. She did this for a couple of seconds at the most, and then when I said trot she’d calmly trot around me. I’d say whoa and she’d stop on a dime. I’d ask her to walk off again, and she’d launch herself into the air bucking and squealing and rearing.  **roll eyes**

After all the histrionics with the lead rope, she’s standing at the end of the lead looking at me. So I pretended to run the other direction. I see her out of the corner of my eye bolt after me. After a few feet I slammed on the breaks and Ava slams to a halt next to me. I swear, the look in her eye was hilarious. I laughed for like ten minutes. Well, maybe you had to be there.  It reminded me of Fellah and that devious “I wanna play” look he’d get sometimes. My parents should get the reference (game of chase with the dog).  🙂

Afterward, I put her back in the grooming area and draped the rope over her back (not tied up). I asked her to stay and walked off to go get treats. She stood there watching me. Didn’t move a foot. I bring her the treat and say “OK” (code word for your free), and then she’s bouncing around like a kid at a candy store. Haha  Then she had to play with the ropes in the cross tie area (they weren’t attached to her, just hanging on the wall). And she’s swinging them back and forth by popping them with her nose.

I hated putting her back in her boring old stall after that, but it was getting late and my toes were numb.

I’m just saying… my mare is weird. I love her to death, but she’s weird.

I really got my butt handed to me this weekend. I helped with barn chores over the weekend for the 20 some horses at my stable. I’m beat, and very sore.

I was fine until the watering part.

I don’t mean to pick on my stable… nope, that’s a lie. I DO mean to pick, but it’s their facility and they can do what they want…. as long as they don’t ask me to water horses again.

Who hauls 40 water buckets down long aisles in the winter?!? 20 horses, 2 water buckets each. I have a bad back, but can normally function passably well in day to day life. I took one look at their current system and about ran screaming from the barn. The least they could do is use a cart to move the full buckets from one end to the other. They don’t even do that. I commandeered a wheel barrow to help make it a bit less stressful on my body, but it still didn’t remove the fact that I had to lift 40 buckets up to chest height to attach them to stall walls.

My shoulders are screaming at me right now.

It was 16 degree’s this morning. Every water bucket was at least half full and frozen.

I got water on my glove and then my glove froze to the stall latch when I tried to open it.

I can’t stand up straight now. My back feels like someone is twisting a knife in it.

I can think of a dozen ways that whole process could be made less horrifying. Several involve using rubber tubing… I would call it a Hose. I could sell this product and make millions!!